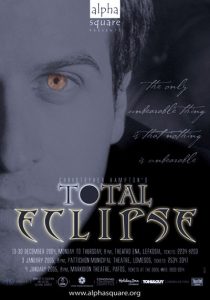 Synopsis
Fascinated by Arthur Rimbaud’s poetry, Paul Verlaine invites him to Paris. When young and audacious Rimbaud arrives at the house of Verlaine’s in-laws there is a great stir, whilst Verlaine himself is completely enraptured by the callous genius. Flitting between Paris, Brussels and London, the two French literary giants embark on an extraordinary odyssey of body, mind and soul. A true story of talent, dependence, debauchery and self-destruction.

The play is not suitable for children under 15.

Forget the massive ‘designer’ programme from which things drop out and serious writing is obscured by an out-of-focus heavenly nude; a nude which turns up as a backcloth in the production suggesting that we were in for an evening with the bitter tears of Petra von Kant and instead lets get straight into Christopher Hampton’s play. Of course it’s lost its shock value. Every soap worth its lather has its gay couple nowadays and there are moments when what a few decades ago could cause the stalls to titter or make the dress circle cross is now perfectly normal matinee romantic chat.

However the gods are on the side of this play; the direction, the design (that nude stays still) and the superlative acting, and of course the play itself does push you into the depths of creativity. By the second half the music is on the way to be drowned in its own syrup but by then we are swept into the story, tenaciously kept up in power by Paul Stewart’s Verlaine. Even though both Rimbaud and Verlaine’s wife are now out of the stage action (except for Rimbaud’s final and so memorable appearance at the close of the play) the performances of Andreas Araouzos and Alexia Paraskeva have earlier on been so potent and convincing that when Verlaine and Isabelle Rimbaud discuss the past you almost feel the dead and the divorced are still there on that stage.

This cohesiveness is something special. It stems from an un-histrionic professionalism that I also observed in a very ruthlessly detailed expert lighting rehearsal. But then Alpha Square is professional. A professional English speaking company.

What drives the play is the fact that it hovers around the truth of creative need. It could easily be titled When Great Muses Crash. It crunches the idea of creativity in an ivory tower.

Firmly directed and lit by Andreas Christodoulides, designed with flair and conviction – except for one frock – by Stavros Antonopoulos and with considerable help from Carolina Spyrou and Yvonne Kolessides the production values are first rate.

Penny Loizou, Bryan Ayres and Orestis Sophocleous play more than one role with skill and conviction, as does Tessa Kolessides who when playing the role of Isabelle (Rimbaud’s sister) cleverly demonstrates the immense distance between herself and the poets’ lives.

Paul Stewart (Verlaine) and Andreas Araouzos (Rimbaud) have proved in other productions their capabilities.

Here with more difficult parts – a couple of poetic greats – they rise superbly to all the demands. Layers and layers of meaning fill the Other Space. Without offending Yasmina Reza, Alpha Square’s latest production almost succeeds in uncovering the meaning of Art. To find the meaning of course there would be no play. The play’s the thing. 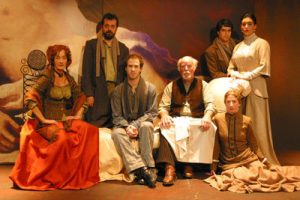